The Department of Health and Human Services (“HHS”) Office of Inspector General (“OIG”) has issued its monthly Recovery Act Oversight report for July 2011. The report revealed what many already know: audits and investigations are have increased considerably since 2009, the year the American Recovery and Reinvestment Act of 2009 (“Recovery Act”) was signed into law.

Comparing data from July of 2009, 2010 and 2011, it is clear that the number of active OIG investigations has been rising dramatically, with almost twice as many active investigations in July 2011 than in July 2010. We can also see an overall increase in the number of audits, inspections, evaluations and reviews in process since 2009. Even though the numbers of audits, inspections, evaluations and reviews experienced a slight dip in July 2011 versus July 2010, the overall trend has been, and will likely continue to be, an upward growth. 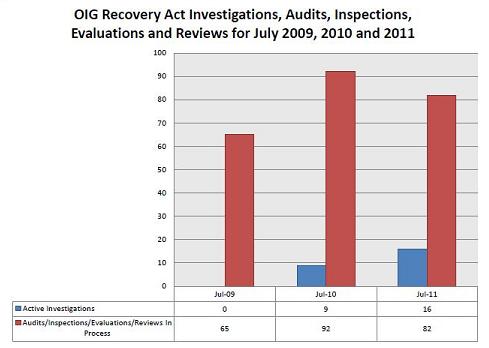 This data should be, yet another, reminder that providers and suppliers have been, and will continue to be, the focus of government scrutiny.